What Do Stock Markets Say About Presidential Elections?

What Do Stock Markets Say About Presidential Elections? 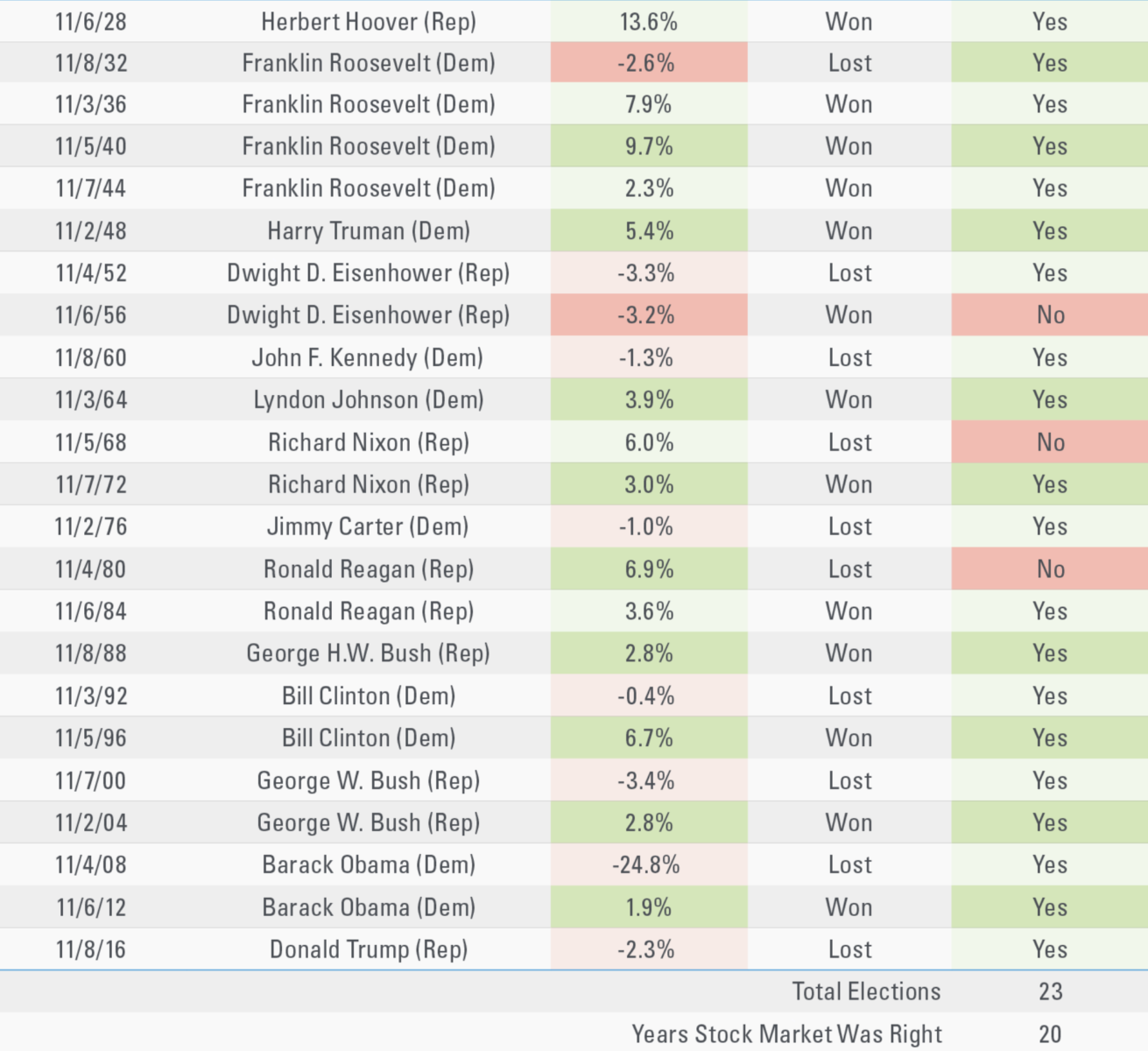 It is part of the American quadrennial experience: Every four years, we elect a new President (and a third of the Senators, and every Representative).

The economy also does its thing: Smart Presidents have passed some form of economic stimulus in their third year in office with the expectation of a pay off a year later — just in time for an economic boost before the presidential election. If you thought POTUS harangue in 2018-19 of Fed Chair Jerome Powell was coincidence, you are missing the bigger electoral picture.

The markets do their thing: they go up and down, sometimes in response to new information, other times randomly. Often for indecipherable reasons, frequently explained with narrative fallacy and hindsight bias in tow.

And then it happens:  Some wag makes an assertion as to its meaning relative to their favored candidate.

We heard this last month during a single-day 2% drop. Several folks rushed to declare “The sell off was because Biden’s lead was widening in the polls.” This is a teachable moment, a beautiful messy combination of poor analytical thinking and bias.1

Here are some general thoughts on what markets say about elections and vice-versa:

• Cause & Effect: It confuses cause and effect, getting them backwards. Incumbents are in re-election trouble because the future discounting mechanism of the markets is incorporating a slowing economy into its pricing. Indeed, we already had the economic crash beginning in March and are still in a deep recession — the worst since at least World War 2 on a GDP basis.

• Noise: Conclusions from noisy, single day market action? Pure insanity: Day-to-day market action is random and noisy, prone to immediate reversals. I won’t even look at daily charts; it’s weekly or longer for me. Trying to pull out clear meaning from any one day’s noise is an exercise in futility.

• Bias: Personal and/or political biases are omnipresent. We all live in a bubble of our own making, have an expensive mental model of the universe we are loathe to modify, and want to be proven right. So what if this leads us into dangerous analytical territory?

• Small data set: Even when the attempt is made to use data to quantify, markets and election outcomes (see chart nearby), we have less than a century of modern results. LPL does a nice job looking at this quantitatively, but let me know when we have a few 1000 years of election data.

• Cherry picking: The incumbent has been in free fall in the polls for months as the market rallied 44%, but a 2% fall is due to the challenger? You can randomly find anything to tie to daily market action. Spurious correlations are everywhere. This is fabulously revealing of a person’s political bias.

• 2016 versus 2018: From a psychological perspective, which has greater import, the Recency Effect, or the Peak emotion? The Peak-end rule tell us “intense positive or negative moments (the “peaks”) are heavily weighted in our mental calculus.” They stay with us longer then do ordinary experiences. So, too, do our most recent memories have a disproportionate impact.

You can read anything you like into any market move. Ever since economics became politicized in the latter half of the 20th century, it has become a parlor game for pundits and other ministers without portfolios.

Reduce the noise levels in your investment process (November 9, 2013)

Hack Your Vacation and other behavioral tips (July 3, 2019)

1. My bias disclosure: I am a political independent — I supported McCain in 2000 in the primaries; voted against Bush, voted for Obama. I would support a technocrat like Bloomberg. I also believe Trump is unfit to be President, and I expect him to lose – possibly in an epic landslide – in November.

Previous Article
Some New Climate Models Are Projecting Extreme Warming. Are They Correct?
Next Article
The Unemployment Rate Is Falling, But More People Are Losing Their Jobs Permanently

The Unemployment Rate Is Falling, But More People Are Losing Their Jobs Permanently
July 2, 2020