Who Benefits From New Technologies?

Who Benefits From New Technologies?

Rising inequality has focused attention on the benefits of new technologies. Do these accrue primarily to inventors, early investors, and highly skilled users, or to society more widely as their adoption generates employment growth? This paper aims to trace out the impact of 20 new technologies on employment of low and high skilled workers around the birthplace of the technology and across the US.

Policymakers are also focused on the location of technology, with growing competition between nations and regions to attract nascent industries and technologies. Whether payments to attract professors specializing in artificial intelligence and biotechnology researchers, the construction of facilities to house new firms, or matching funds provided by angel or venture capital investors, governments have sought to establish an early presence in promising industries.

In undertaking these initiatives, policymakers have been attracted by the success of technology clusters such as Silicon Valley, Herzliya, Shanghai, and Shenzhen. The success of the Boston area in biotechnology illustrates the positive dynamics that can occur. The initial wave of start-ups spinning out of Harvard and MIT in the 1980s and 1990s resulted in a number of significant enterprises, such as Biogen, Genzyme (now part of Sanofi), and Vertex Pharmaceuticals. The region has continued to attract new entrants, raising almost $5 billion dollars in venture capital in 2018 alone. Finally, the presence of academic institutions and younger firms have attracted investments in major research facilities by established firms from elsewhere, such as Novartis, Pfizer, and Takeda. Between 2010 and 2018, the Massachusetts biopharmaceutical sector grew from 55 to 74 thousand jobs.

But despite the many billions of dollars devoted annually to the attraction of infant industries, these policies have attracted relatively little systemic attention from economists. Motivating the policy interventions by governments are two propositions. The first is that public interventions will effectively enhance the presence of an emerging industry in a given region; the second, that this initial activity will yield long-run impacts for the region. Our INET working paperexamines the second of these claims.

To do so, we study the evolution of twenty new technologies in the United States from 2002 to 2020. We develop a methodology for systematically identifying two-word phrases, or “bigrams,” associated with a new technology. We then look for documents linked to these new technologies, including U.S. patents, earning calls from publicly listed firms, and job announcements in the Burning Glass database. This evidence allows us to assess the impact of these technologies along a dimension of crucial importance to policymakers: employment. In particular, we examine the evolution of the number, location, and quality of new jobs associated with these new technologies.

The key results of our analysis are as follows:

While initial hiring is focused on high-skilled jobs, over time the mean skill level in new positions associated with the technologies declines sharply, which we term a “skill-broadening” effect. See Figure 2

The initial geographic hub retains an important advantage that persists over time. This pattern is particularly pronounced among high skill jobs. See Figure 4

Hubs are most likely to arise around universities and areas with more educated populations. See Figure 5

Our work thus suggests a strong advantage for areas that were associated with the earliest activity in a technology. Despite the skill- and region-broadening effects alluded to above, not only does a disproportionate share of new employment continue to locate there, but especially the most desirable high-skilled positions. 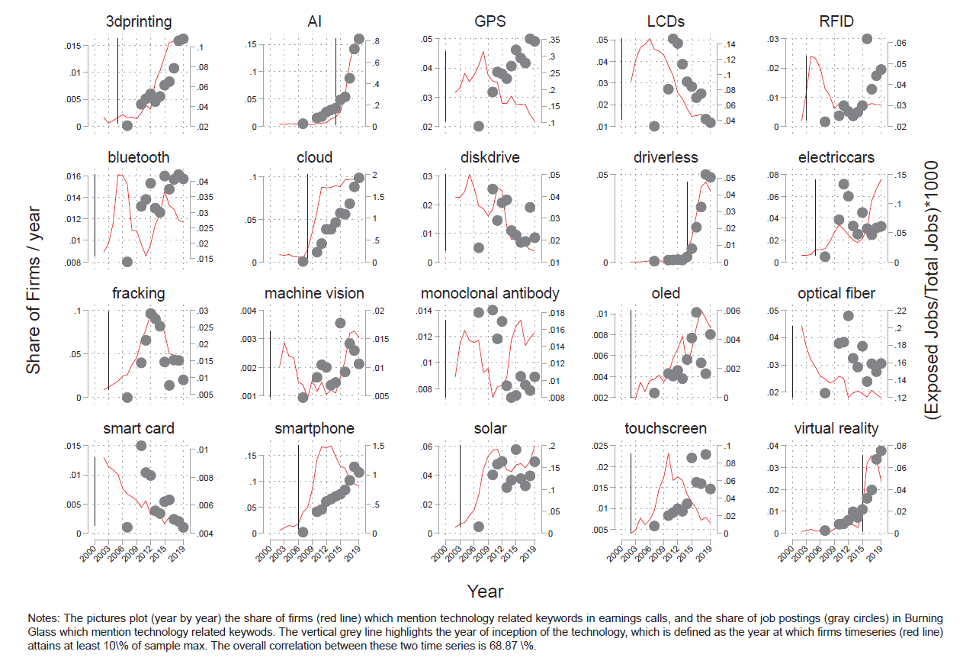 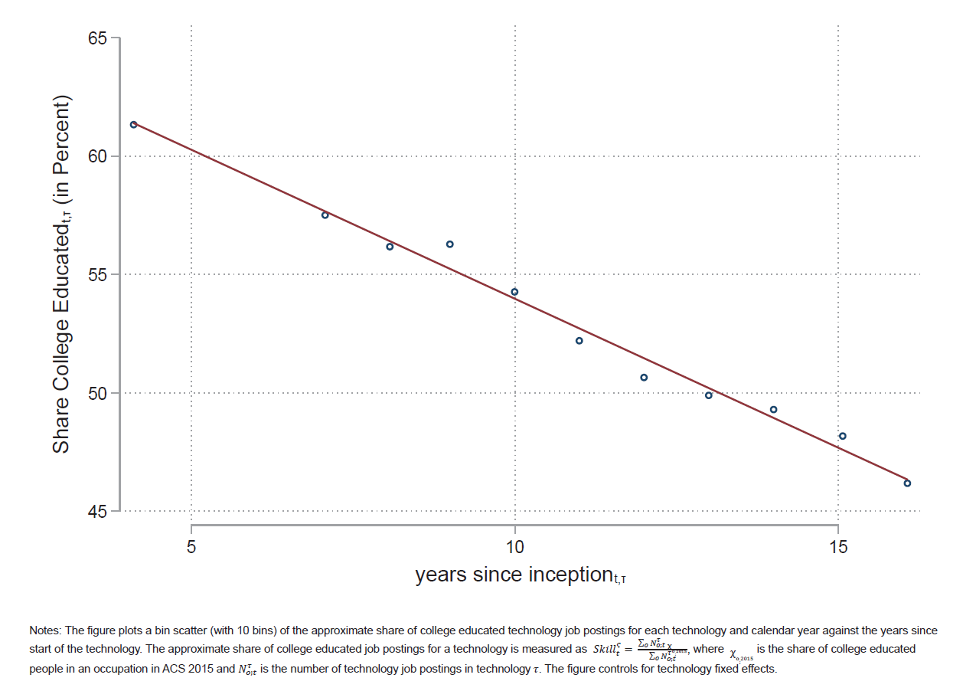 Figure 3 – Coefficient of variation by year since start of technology 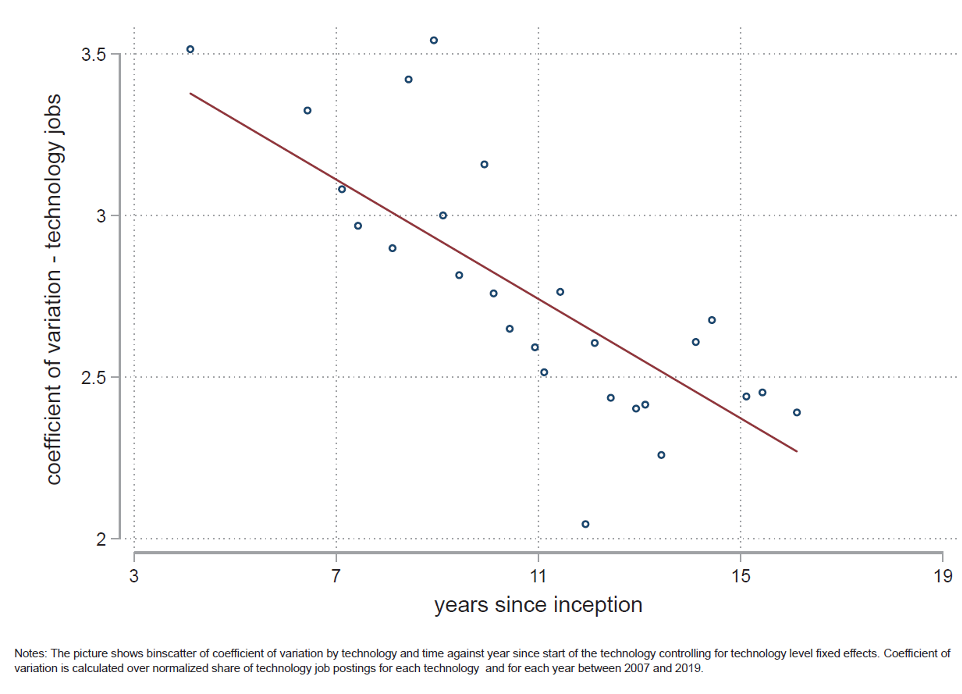 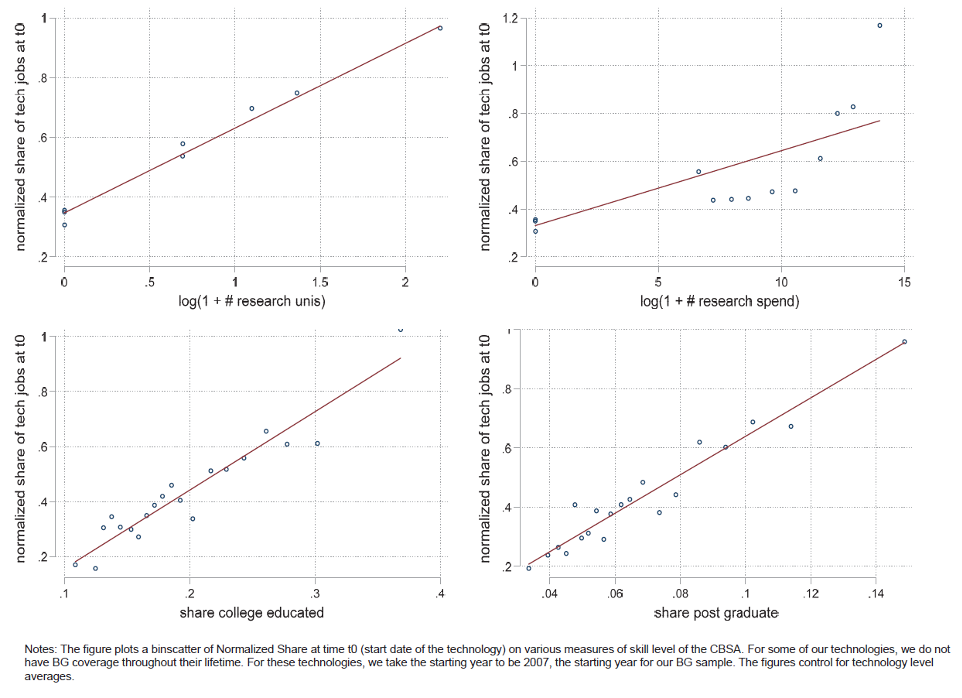 Previous Article
Board Member Margaret Brown Sues CalPERS, Board President Over Gang-Style Retaliation for Efforts to Oppose Its Incompetence
Next Article
Can the Aspen Institute’s Elite Economists Beat the Coronavirus Depression?