By John Helmer, the longest continuously serving foreign correspondent in Russia, and the only western journalist to direct his own bureau independent of single national or commercial ties. Helmer has also been a professor of political science, and an advisor to government heads in Greece, the United States, and Asia. He is the first and only member of a US presidential administration (Jimmy Carter) to establish himself in Russia. Originally published at Dances with Bears 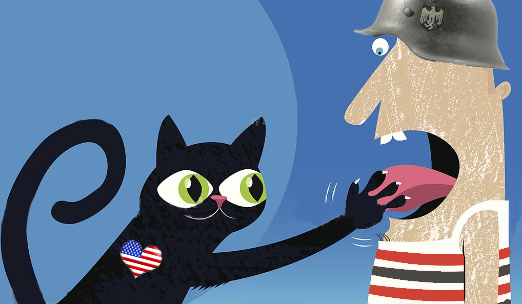 For the first time since the war against Russia began in the Ukraine eight years ago, the German government has not blamed Moscow (repeat not blamed Moscow) for coordinated acts of sabotage on Sunday, which the German secret services say they are investigating. The Germans also say they are investigating, and have yet to confirm the culprits responsible for the bomb attacks on the Nord Stream gas pipelines in the Baltic Sea two weeks ago.

The Berlin Chancellor, the Bundeswehr, and the Bundesnachrichtendienst (BND) were never so silent for so long in blaming Russia “with unequivocal evidence in writing of poisoning with a Novichok chemical warfare agent” of Russian political opposition figure, Alexei Navalny, in 2020.

The official German silence follows the cut of Deutsche Bahn cable communication lines at 0640 on Sunday morning, halting all German trains in the north of country for several hours, stopping passenger trains moving westwards to Denmark and The Netherlands, and freight trains eastwards towards Poland and the Ukraine..

The German state propaganda agency Deutsche Welle (“German Wave”) announced: “‘Sabotage to cables that were vital for train traffic meant Deutsche Bahn had to stop trains running in the north this morning for nearly three hours,’ Deutsche Bahn said. The German rail operator said security authorities had taken over the investigation. There was no immediate information on potential suspects. Investigators, however, said the communications cables were cut at one location outside Berlin and another in the western state of North Rhine-Westphalia.  German Interior Minister Nancy Faeser said authorities ‘have to assume intentional acts’ were behind the rail disruption as cables were severed at two locations.  Transport Minister Volker Wissing added, ‘It is clear that this was a targeted and malicious action.’”

The locations of the cable attacks identified by German police  were in Hohenschönhausen, a district of Berlin, and in the Westphalian town of Herne. North Rhine-Westphalia is in the west of the country, on the Dutch border, with Dusseldorf and Cologne the major cities; the Berlin sabotage was 512 kilometres by road to the east. 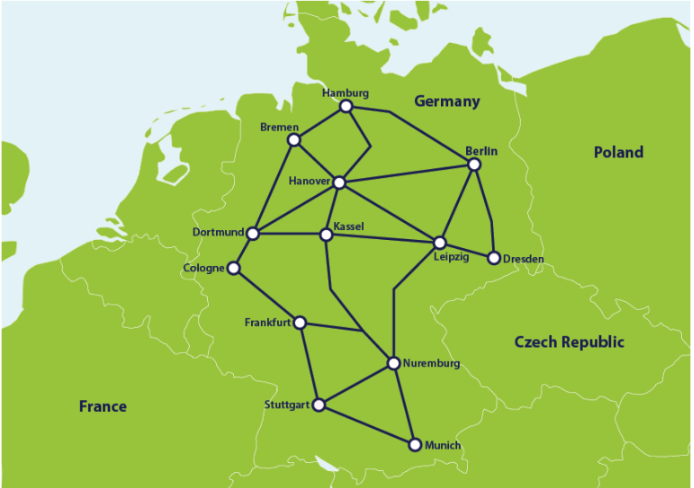 Source:   https://www.eurail.com/
German police told the DPA press agency the precise locations of the rail cable cuts were Hohenschönhausen, Berlin, and Herne, North Rhine-Westphalia, 512 kms away. “Deutsche Bahn (DB) had earlier blamed the network disruption on a technical problem with radio communications. Spiegel magazine said the communications system was down at around 6:40 a.m. (0440 GMT). At 11:06 a.m, DB tweeted that traffic had been restored, but warned of continued train cancellations and delays. The disruption affected rail services through the states of Lower Saxony and Schlewsig-Holstein as well as the city states of Bremen and Hamburg, with a knock-on effect to international rail journeys to Denmark and the Netherlands.”

That was a deliberate innuendo. Der Spiegel has already used the Poles to cast public blame on Russia for Nord Stream. The German intelligence  outlet also aired a fabricated CIA report implying the same thing.

A Brookings think tank report in Washington has claimed that publication of evidence of US and Polish involvement in the Nord Stream attack was Russian state propaganda, “preferred Kremlin  narratives”, and “Kremlin backed accounts”; Brookings also concluded that “experts broadly agree that Russia is the key suspect.”  This research at Brookings has been paid for by the German government and a German corporate foundation. In fiscal year 2020, Brookings has reported the German Government was the single largest government donor to the think tank with an amount over $2 million. A German foundation called Robert Bosch Stiftung added another million dollars.   The Bosch group doubled its donation to Brookings in 2021;  it sponsors anti-Russian propaganda.  Under Ukrainian pressure, in March Bosch stopped its consumer products and truck component manufacturing in Russia.

In Berlin, the German Foreign Minister Annalena Baerbock has said nothing in her ministry press releases, public speeches, or Twitter stream on the Nord Stream case. Nor has her fellow Green Party minister for economics and climate, Robert Habeck. Both face a hostile reception when the Greens party holds public meetings later this month.

The North Rhine-Westphalia state, where the western rail cable cut occurred, is Christian Democratic Union (CDU) country, with declining Social Democratic Party (SPD) votes, and a minority Green representation which has been growing, as has the rightwing Alliance for Germany (AfD).   The Mecklenberg-Western Pomerania state, part of the Democratic German Republic before reunification, is the northeast German state directly affected by the campaigns to stop Nord Stream gas coming ashore at Greifsvald; the state is dominated by a left-right coalition which is breaking apart.

Current opinion polls in both German states reveal the steady growth of the AfD;  the party now draws one in four of the Mecklenberg-Western Pomerania voters.

Political weakness in the multi-party coalition in Berlin and personal greed and corruption are  unprecedented since 1945, according to veteran German sources. The national voter polls show that since the Russian special military operation began in February, Baerbock’s and Habeck’s Green voters have lost confidence, as have the SPD voters backing Chancellor Olaf Scholz. If a national election were called this month, they would be ousted from office. 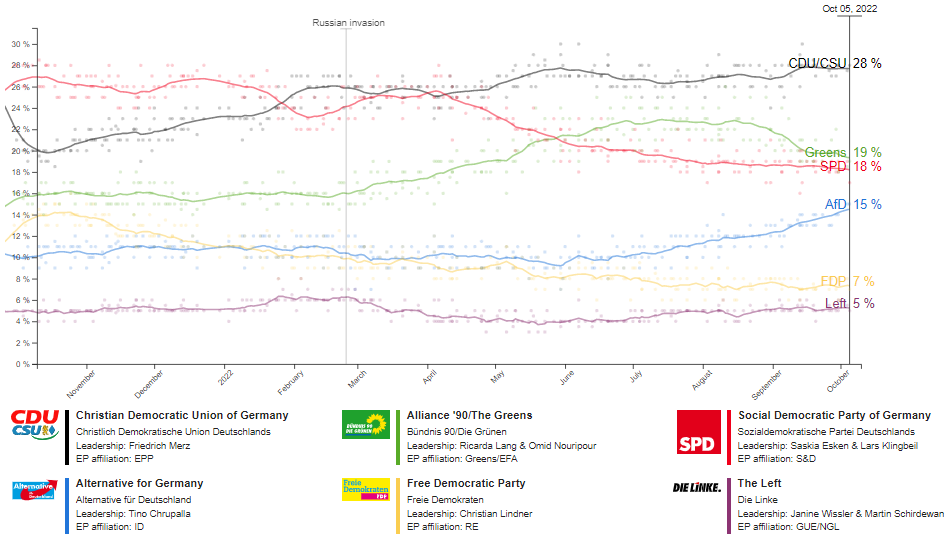 German sources, who remember Scholz when he was mayor of Hamburg (2011-18), describe him as “having reached the limit of his capability in the city then — also the strength of his backbone.”

In an interview with the small northwestern newspaper Neue Osnabrücker Zeitung, Scholz said on September 28: “Everything suggests that Germany will probably get through this winter, even though Russia has stopped its gas supplies for flimsy reasons.” Scholz omitted to say —  and the journalist failed to ask him —  about the cause of the Nord Stream attacks two days earlier.

The co-leader of the German Greens, Omid Nouripour, an Iranian by origin, has been vociferous on his Twitter stream in support of political protests in Iran and in celebrating the Jewish New Year between September 25 and September 27. Nouripour had nothing to say about the Nord Stream bombings on the day in between. He has been much swifter to react to the rail line sabotage. 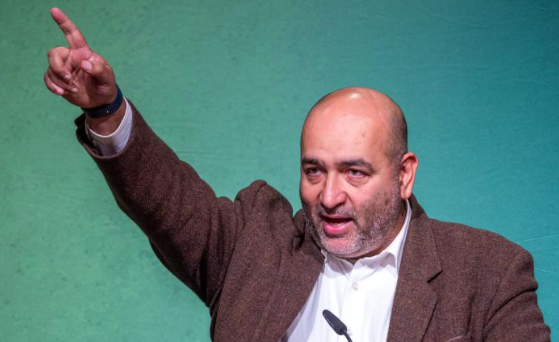 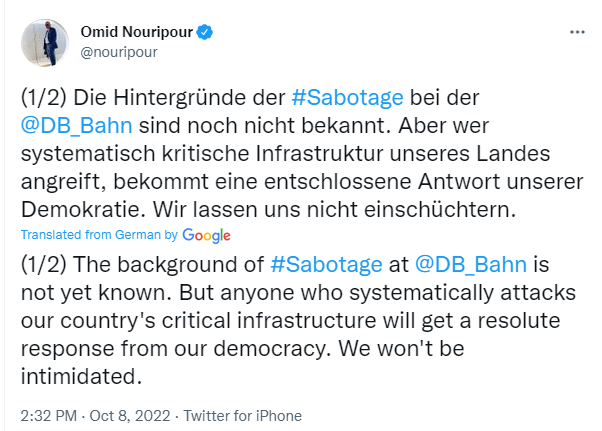 Source: https://twitter.com/
There are roughly twice as many Jews living in Iran as are living in Germany; Jewish voters in the last German election comprised less than 0.2%.  More Russians live in Germany than Jews.

A German electronics engineer and IT specialist reports it is “is normal to have serious incidents with Deutsche Bahn. I remember one when unknown people planted steel plates on to the rails and the high-speed train to and from Switzerland had to be stopped. Police helicopters followed to patrol the line for a week after that. From what has been reported publicly, and noting the coordination of the incidents far apart geographically, my conclusion is that due to the tight time difference [between the two cable cuts] only a secret service could plan this. Whether it’s our own secret service or the Polish, I don’t say. I would exclude the Netherlands and France too. I also remember how the German government was and still is criticizedby [Ukrainian President Vladimir] Zelensky    and [Ukrainian Ambassador to Berlin Andrei]  Melnyk.”

For the archive of investigations of how former Chancellor Angela Merkel and her intelligence and security men acted to blame the Kremlin for the Navalny Novichok affair of 2020, read this. Source: http://johnhelmer.net/
Every German publisher contacted to publish the book on the Navalny case has refused.