Will the E-Money Boom Make the UK a Hub of Money Laundering?

Will the E-Money Boom Make the UK a Hub of Money Laundering?

Yves here. Our one-time frequent writer Richard Smith, who has devoted a great deal of energy over the years to pursuing international fraudsters, has been getting more and more notice as an expert on some of the tools they use. It may seem rhetorical to question whether the UK will continue to be a major money laundering hub. Nicholas Shaxson, in his classic Treasure Island, described how the US and UK had long been competing for leadership in “offshore,” as in operating financial secrecy jurisdictions. On top of that, some Brexiteers have championed the UK becoming “Singapore on Thames” which in their vision, includes even more financial buccaneering. E-monay looks like a new addition to an old toolkit.

Some readers will notice the way the article muddies the Baltic nations with Russia. That is peculiar give that there is considerable tension between these countries and Russia. For instance, in 2018, the US deployed soldiers and tanks to Latvia in a show of force. I would assume this broad brush is the result of openDemocracy editing. But some of this is also due to the analogy to the 2014 “Russian laundromat” which moved illicit funds out of some former Warsaw Pact countries.

A survey in April found four out of five Britons – many forced to do all their shopping online – were considering new digital ways to pay.

Some are turning to ‘e-money’, with a raft of new money-handling products aiming to challenge industry leader PayPal.

From a health point of view, this is safer than handling cash and visiting shops. But, anti-corruption researchers warn, the boom in e-money poses another risk: money-laundering.

There are already concerns that regulators, including British ones, failed to keep close tabs on German payments giant Wirecard, which went bust two weeks ago.

The UK’s watchdog, the Financial Conduct Authority (FCA), for a few days even froze some £500 million in customer money at the firm’s British subsidiary, while it made sure the money actually existed.

Now an investigation by openDemocracy reveals UK-regulated electronic money institutions, or EMIs, are being touted as a replacement for networks through which billions of dollars of dark money moved in and out of the former Soviet Union.

Our research follows individuals and institutions who were linked with Baltic banks that were fined for enabling – or failing to prevent – industrial-scale money-laundering. We’ve found that some are moving into the British e-money business, complete with a stamp of approval from the FCA.

And we have found an open Russian-language internet trade in UK shell companies with EMI accounts, EMI licences and even an anonymous EMI provider on offer for £1 million.

Anti-corruption group Transparency International believes the sector poses an emerging threat in the battle to stop criminals from cleaning or moving their dirty money.

The Next Russian Laundromat?

For years corrupt officials, criminals and tax-avoiding entrepreneurs used anonymously held ‘shell’ companies (often registered in the UK or its territories) to open bank accounts in the Baltic states.

This relatively simple scheme enabled some of the biggest laundering schemes ever exposed, such as the multi-billion-dollar ‘Russian laundromat’, revealed in 2014, and similar pipelines for dark or dirty money out of Azerbaijan and Ukraine.

The huge flow of money through this machinery is thought to have reduced to a trickle since a 2018 crackdown in Latvia on banking for people who do not live in the country.

But now an alternative route has been suggested: EMIs, including those registered and regulated in the UK.

There is a cottage industry advising people and business in the former Soviet Union about offshore structures. It is pretty frank about this shift to British EMIs.

Back in 2018 the Russian-language site Zapiski ob Ofshorakh (‘Notes on “offshores”’) set out the pros of various EMIs, including UK-regulated ones. And its explanation for why it was doing so could not be blunter.

It said: “In connection with the mass closures of non-resident bank accounts in Baltic states – and the growing difficulty in working with foreign banks – some entrepreneurs are looking to open corporate accounts in payment systems.”

The message: it is now harder to move money – including dirty or untaxed money – through shell firms and Baltic banks, so try EMIs instead.

One of the site’s specialists even boasts in a recent video how clients can set up an SLP and then have a credit card issued by an EMI sent to the firm’s proxy address in Scotland and from there on to Russia or Ukraine.

IQD Consulting has been offering to sell an unnamed British company complete with an e-money licence. The price tag? £1 million.

IQD did not respond to a request from openDemocracy for comment. It did, however, remove its English-language offer for the e-money company after we got in touch. 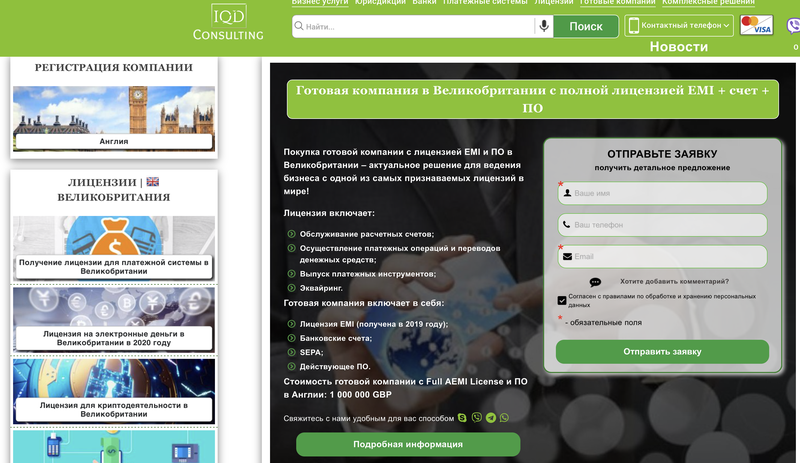 They were the bankers who helped North Korea develop ballistic missiles: three financial institutions in Latvia were fined after an FBI probe exposed their lax controls had let the world’s most secretive state get around sanctions.

Now people who owned or worked for those banks are getting what – to outsiders at least – looks like an endorsement from the British state, a kind of financial kitemark: registration from the FCA as EMIs.

Latvian banking, specifically non-resident banking, was widely seen as a breach in international defences against money laundering. It suffered scandal after scandal until Latvia, under pressure from the EU and US, moved to stop its banks giving accounts to anonymously owned shell companies or dummy corporations, not least from the UK and its overseas possessions.

The great crackdown on Baltic non-resident banking in 2017-18 coincided with a gradual migration of some of its institutions and personalities to the UK’s e-money industry.

One Latvian bank, Rietumu Banka, already has links to the British Isles. One of its three owners is Dermot Desmond, a leading shareholder of Scottish football champions, Celtic.

The bank has been fined by Latvian regulators for failures in money-laundering controls. It is also currently appealing against a criminal conviction – and penalty of €80 million – from a French court for enabling mass tax evasion.

Now its shareholders own a British EMI, Decta, and Rietumu banka provides clearing services for it and five more.

Decta told openDemocracy that it “acts in strict accordance with the requirements of FCA”.

It added: “We regularly pass anti-money-laundering (AML), Anti-Fraud, Know Your Customer and Combating the Financing of Terrorism audits held by Visa, Mastercard and big-four auditors, proving Decta to be complying with all latest AML standards.”